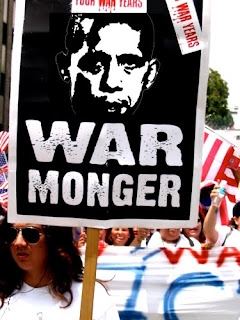 I was going to post on the inevitable smears on Assange. Fortunately Chris Floyd at Empire Burlesque has done it quicker and better:

We have the President of the United States -- who has already openly proclaimed his "right" to assassinate anyone on earth, including American citizens, without the slightest due process of law, simply at his arbitrary command -- now feverishly expanding the use of death squads, whose stealthy night raids on sleeping villages have already killed a vast number of innocent civilians in Afghanistan (as the Wikileaks documents show). This same administration is now running "black ops," secret armies, proxy wars and other covert activities in more than 75 countries around the world. That is to say, the Obama Administration is now murdering people in their beds, fomenting bloody ethnic conflict, supporting and/or carrying out acts of terrorism, spreading corruption, assisting dictators, arming warlords, spreading hate and suffering all over the world -- and doing it knowingly, proudly. ("Evil in broad daylight" indeed, as Arthur Silber details here.)And these are the moral paragons who have now turned their machinery of lies and smears against Wikileaks. For make no mistake; although the rape charges were manufactured in Sweden -- which, incidentally, is where some of Wikileaks' servers are located -- they emanate from the proud deathlords in Washington. Indeed, didn't we hear just a few weeks ago that the Peace Laureate's people had launched a campaign of pressuring foreign governments to put fetters on Assange and his organization? Now Sweden's center-right government -- no, Rush, Sweden is no longer the super-socialist fairyland of your nightmares -- has obviously hearkened to the master's voice.But although this first foray has been rebuffed, it is certain that what we are seeing is the beginning of a concerted effort to destroy Assange as a public figure and thereby discredit the work of Wikileaks -- and by extension, the truth of its revelations.And smearing, of course, is just the first step. If that doesn't work ... well, the avowed and openly proclaimed proponents of assassination certainly have other, more "prejudicial" methods at their disposal, nicht war?